This post may contain affiliate links that compensate us for purchases through our links. Learn more 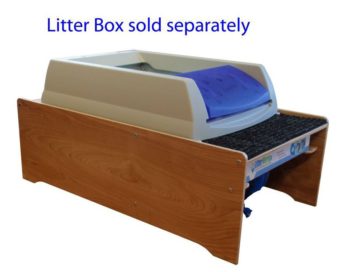 The Litter Bagger is a good solution for ScoopFree owners that don’t want to spend money on disposable trays. This unit increases the storage capacity of cat waste because it replaces the need for disposable crystals pre-filled trays by using a waste bagging system instead.

The Litter Bagger features a permanent tray made of durable plastic that comes with a cutout at the bottom and it’s installed the same way as a disposable pre-filled tray. The difference between the LitterWorks tray and the cardboard disposable tray is basically the control of odor and the capacity to contain the cat’s waste. This system also comes with a stand made from plywood that features a cutout also matching the tray cutout to allow the clump to drop into the liner.

It’s important to note that ScoopFree auto litter box uses a rake to rake the feces into a cardboard compartment at the end of the tray. The urine gets absorbed by a special crystal litter that dries the clump out. The crystals come in a pre-filled cardboard disposable tray. 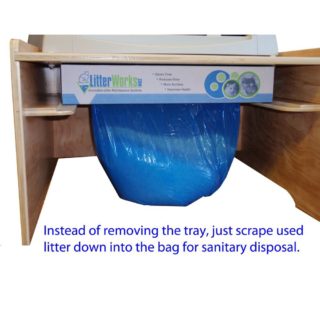 Basically, what the Litter Bagger does is eliminate the pre-filled crystals disposable trays and replace it with a permanent solution, increasing the waste-collecting capacity and helps to contain odors better.

How does the Litter Bagger do it?

The Litter Bagger system comes with a stand that needs to be assembled (with connectors), a plastic tray, a nose guard, a scraper, and a cartridge with liners. 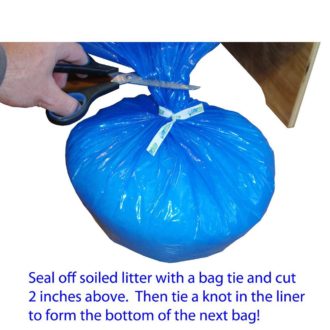 The plastic tray and stand come with a matching cutout (only for ScoopFree version) to allow the clumps to drop into the liner so instead of using a pre-filled tray that accumulates waste in the tray’s waste compartment the Litter Bagger collects the waste in the liner which lasts up to 2 weeks with one cat. When the liner is full simply tight it, cut it, and make a knot on the new liner.

How to change the litter?

Replacing the litter is very easy. As the Litter Bagger system comes with a scraper you just scrape all the dirty litter down the hole, then tighten and cut the bag, add new litter.

When placing the ScoopFree on the Litter Bagger stand, it gets 11”-12” elevated off the floor. So between the stand and the ScoopFree the total solution’s height is 17-18 inches.

The Litter Bagger system for ScoopFree works as advertised. It helps you to save money on pre-filled crystal disposable trays and it reduces the maintenance from scooping the clumps of the cardboard waste compartment every 1-2-3 days (depending on the cat) to tossing the bagged waste once a week.

The Litter Bagger unifies the ScoopFree with a solution similar to the Litter Genie, all in one product.

√ The Litter Bagger system may be suitable:

x The system may not be suitable:

Lorena Avila is a Marketing Engineer, Writer, cat figures collector, cat lover and cat owner, but above all a very passionate investigator of felines. She started investigating cat products 7 years ago when she couldn't find reliable reviews on the internet to buy an automatic feeder for her own cat and since then she has been helping others providing honest information online.
Follow her on Twitter, Facebook, Instagram and YouTube.